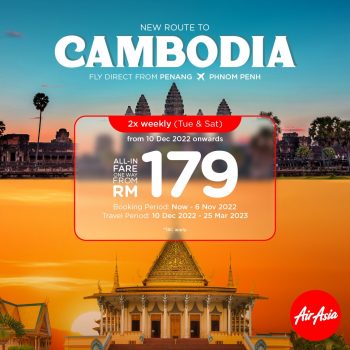 AirAsia Malaysia is having their Special Deal. AirAsia announces new route to Phnom Penh from Penang.

AirAsia today announced yet another highly-anticipated new route connecting travellers from Penang to Phnom Penh, starting 10 December 2022 with amazing fares on sale now for a limited time only with first flight to commence with fares on sale  from just RM179 one way !

This new route is set to further boost AirAsia’s connectivity within Asean and allow for seamless travel between Cambodia, often dubbed the ‘Kingdom Of Wonder’, and Penang ? AirAsia’s third largest hub in West Malaysia. Following the inaugural flight in December, the flight frequency for this route will be twice weekly initially. AirAsia’s hub on the island of Penang has been steadily growing its route offerings, having just launched its inaugural route to Bali on 20 October 2022.

To celebrate this momentous announcement, airasia rewards members can grab great value fares for this route for a promotional fare  of just RM179* one way or RM428* both ways for a travel period between 10 December 2022 and 25 March 2023 through the ‘flights’ icon on the airasia Super App or website.

Value seekers are urged to get in quick,  as the booking period for this unbeatable sale  is only from now till 27 November 2022!

“Phnom Penh is no stranger to AirAsia. Prior to the pandemic, we flew thousands of travellers to and from the city each month and now with the lifting of travel restrictions to Cambodia, there has been a surge in demand for more flights and routes. We sincerely thank the Cambodian government for their efforts in enabling seamless travel between the two countries, and we look forward to introducing new routes from Malaysia and beyond in line with growing demand for air travel ”