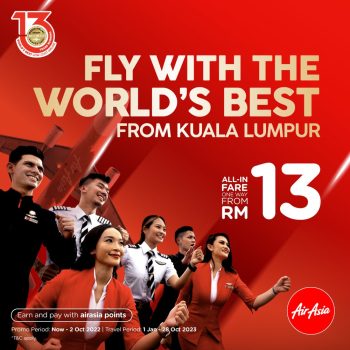 To celebrate winning the World’s Best Low Cost airline for the 13th time in a row, AirAsia has today launched seats on sale from as low as RM13* to mark each year being awarded the global low cost leader.

With Japan recently announcing the lifting of restrictions from next month, AirAsia X has also recently announced reopened routes from Kuala Lumpur to Tokyo (Haneda) and Sapporo and Thai AirAsia  has announced a new route from Bangkok to Fukuoka which are on sale for travel commencing November now from RM599* for economy or RM2,599* on a premium flatbed.

A new direct route connecting Penang to Bali for the first time, is also included in the sale with fares from just RM159.

Karen Chan, Group Chief Commercial Officer of AirAsia said: “It’s been an incredible month with many wins including our biggest ever sale day post Covid last week, but this really tops the list, to be awarded the World’s Best Low Cost Airline 13 times in a row.

“AirAsia is the people’s airline so it’s even more gratifying to win the ‘people’s choice’ Best Low Cost Airline award.

“As a huge thank you to the millions of people who choose to fly with us each year and to those who voted for us, we are throwing this special sale with fares starting from just RM13 – or RM1 for each year we’ve won!

“We’ve already flown over 700 million guests and now we are well and truly back, we look forward to making a huge difference to many millions more in years to come, just as we have done for nearly 21 years”