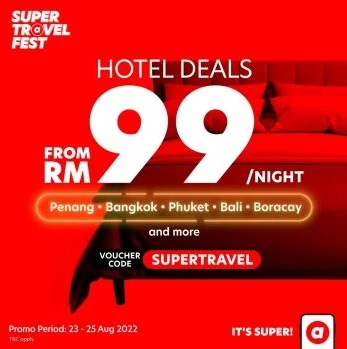 The SUPER Travel Fest by airasia Super App is back, with bigger and better travel deals for everyone, with deals from even more hotels and flights from over 700 airlines to 3,000 destinations around the world and 700,000 hotels.

As one of the fastest-growing online travel agencies (OTA) in the region, airasia Super App is giving its members a special treat with rates starting from RM99 per room night only for a wide array of popular and top-rated hotels at exciting destinations such as Kuala Lumpur, Langkawi, Bali, Phuket, Boracay and more throughout the SUPER Travel Fest promo period.

To sweeten it up, there will be SUPER Hour Deals from 12PM – 1PM each day where airasia Super App users can book and stay at top-tier hotels in Langkawi, Penang, Kuala Lumpur, Phuket and Bali from only RM52 per room per night! Don’t miss out on this value-for-money and limited-time only SUPER Hour Deals, so set your alarms for 12PM on these dates:

These unbeatable deals and more are available by clicking on the ‘Hotels’ icon on the airasia Super App. Promotional hotel stays are for now until January 2023. The offer is limited and available on a first come, first served basis.